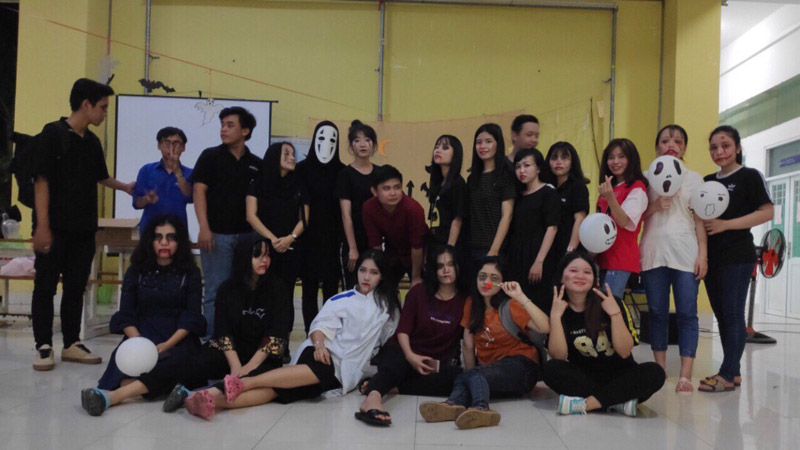 Have you ever heard about Ghosts’ Festival on October 31st?  We think you’ve ever heard about it at least once.  Yes, we are talking about Halloween day! That was the eve of the Western Christian feast of All Hallows' Day and Halloween, which is held to dedicate the dead, including saints (hallows), martyrs, and all the faithful departed. To be a part of this holiday, students of the School of Foreign Languages also had many activities in the weekly English-Speaking Club (Nov, 1st, 2018). Luckily, we- Quế Thư, Cẩm Mến, Hồng Mỵ, and Tài Lợi had a chance to engage in ESC that night as the members of ESC team. Although we have never participated in any official Halloween festivals, we could feel the horror atmosphere there as if we were in a real Halloween night. 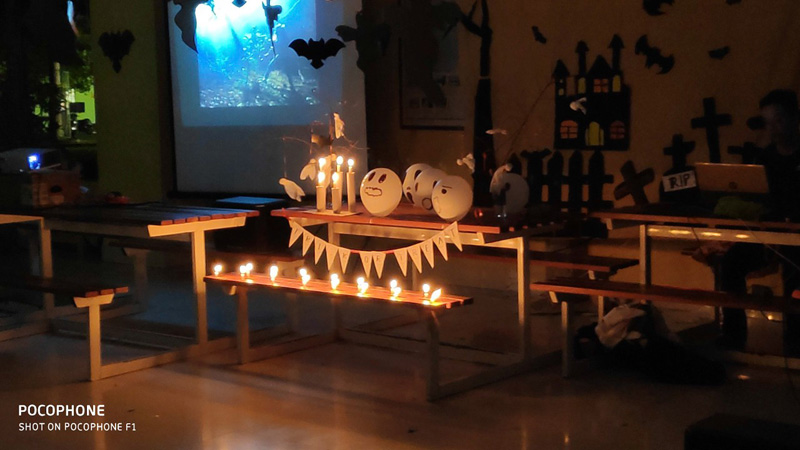 At the beginning, the participants were watching a short movie which was very scary. While the audiences were watching, some of the ESC’s members were ready to surprise them by sneaking behind and haunted them with the creepy costumes. Actually, it could be funny since our intention being considered as failure because students didn’t care at all and they even asked us to take photos together despite the well-prepared costumes. 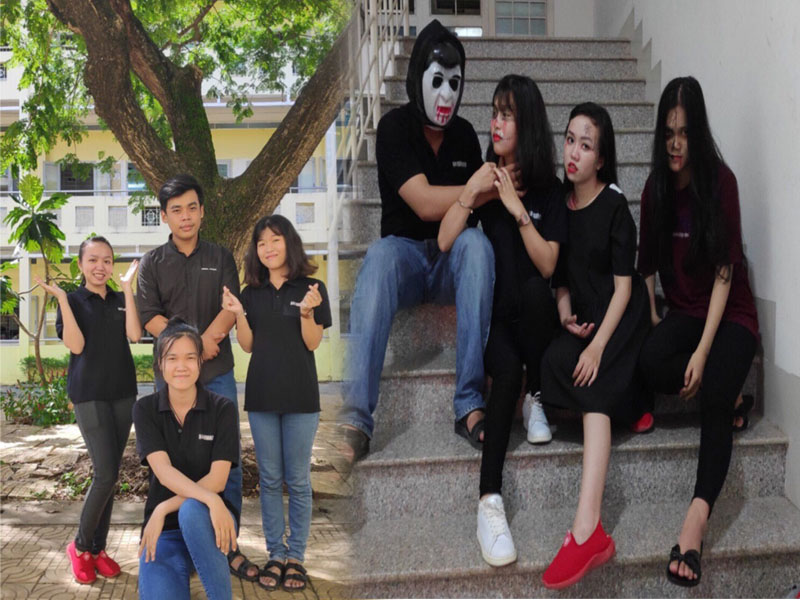 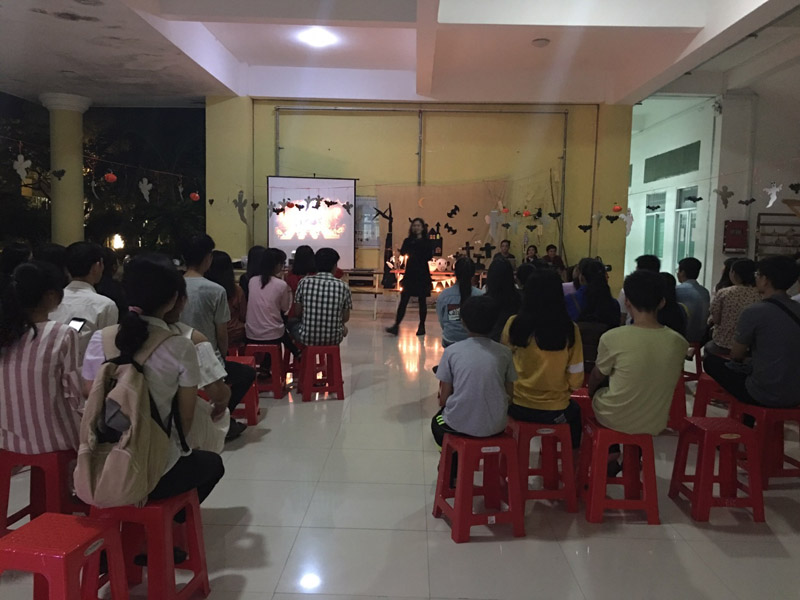 Ms. Sachi is sharing her experience about Halloween festival.

The Halloween night at English Speaking Club was ended successfully by the participants’ pleasure. We believed that each person who joined the Halloween festival that night also had more information as well as a chance to celebrate a special day from Western countries. By writing this, we can share our feeling about a special festival inherited from the Western. We do know that Halloween is not only a chance for people to play tricks to others, but it also has a significant humanity value. Life and death are two unseparated aspects. When someone passes away, we keep all memories about them at the bottom of our heart and believe that they will return one day. Halloween is a chance for life and death to harmonize. It showed people’s trust in the unreal world, and shortened the difference between life and death where we ourselves do not know whether it exists or not. After the festival, we all have the same feeling about the death which is not the end of everything but the new dawn for a new life.

How about you? What do you think about Halloween? And are you scared if you see a headless ghost chasing you? 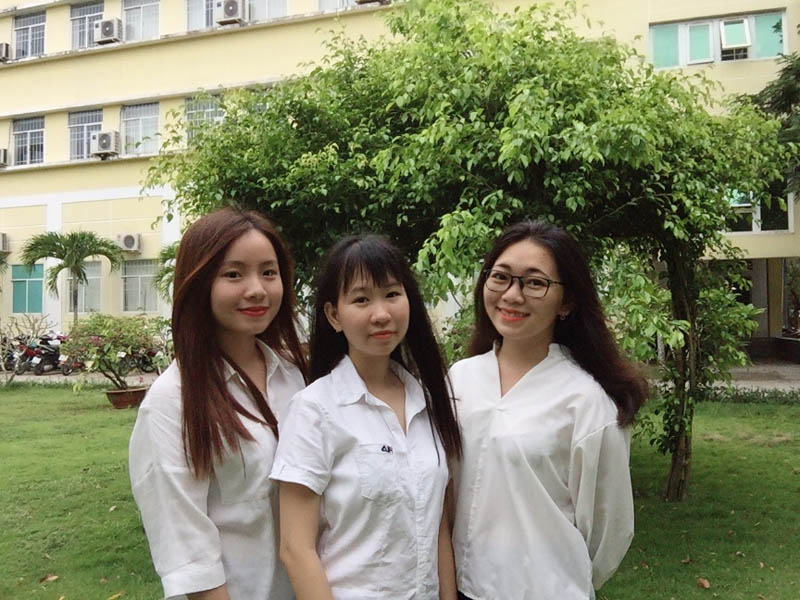 We are Thao Quyen, Uyen Nhi, Thuy Duong and we are fresh-man students of School of Foreign Languages at Tra Vinh University. As English major students, we have many opportunities to foster our language proficiency. 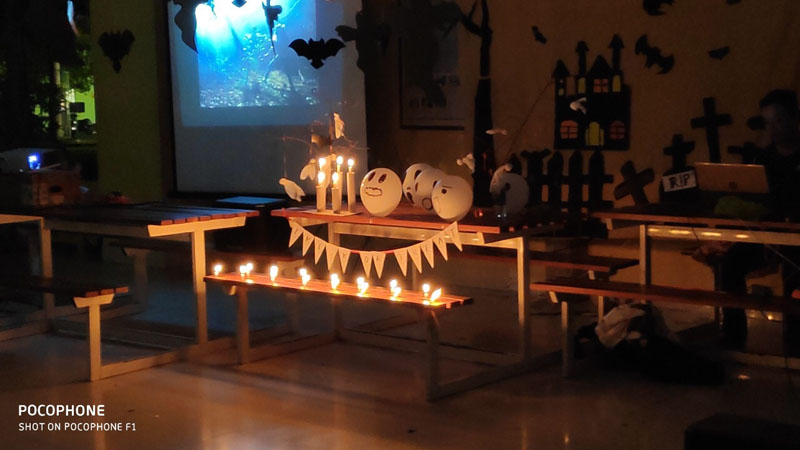 One of the most effective ways for us to practice is participating in English Speaking Club (ESC). ESC is only held once a week, but we have learnt so much in every meeting. The most recent meeting that we joined was last Thursday, November 1 warmed up by Halloween festival theme. With thoughtful preparation by volunteers from America and teachers and senior students, Halloween night had attracted to attention of many students. Before starting, we watched a short film about Halloween and we guessed some famous characters in horror movies. After that, we played a few funny games organized by Ms Sachi.

From these activities, we have known that Halloween or Hallowe’en is a celebration which is held in many countries on 31 October. Halloween comes from the ancient Celtic festival Samhain. On this occasion, people dress up as characters in horrible novels or movies to frighten others and children go to their neighbour house to play ‘treat or trick’. Also at the previous ESC, we danced and sang together. It was really happy and fun.

ESC helps us know a lot of vocabularies and connect to each other by working in groups. Moreover, we feel that we have become dynamic and creative through activities. At ESC, all students enthusiastically take part in many fun and useful activities and we can improve speaking and listening skills as well. For us, ESC is an atmosphere where we call ‘studying hard, playing hard’ for everyone. 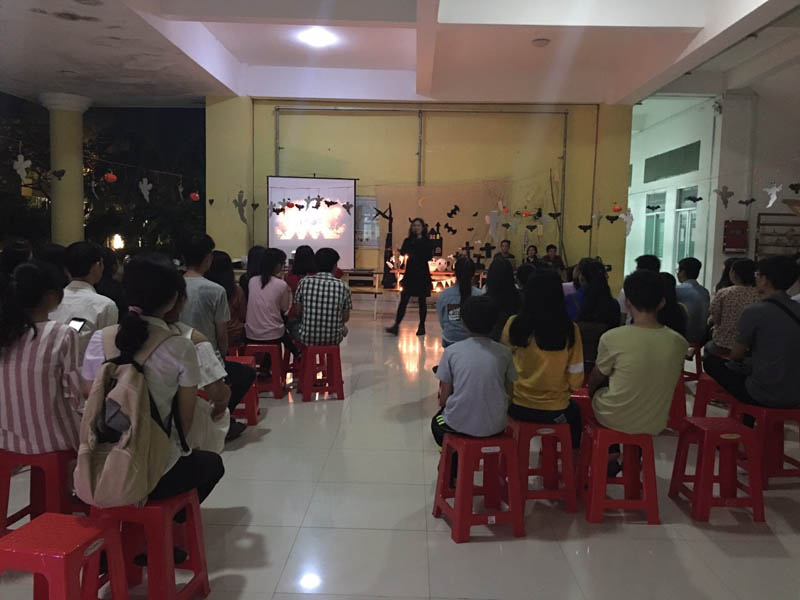 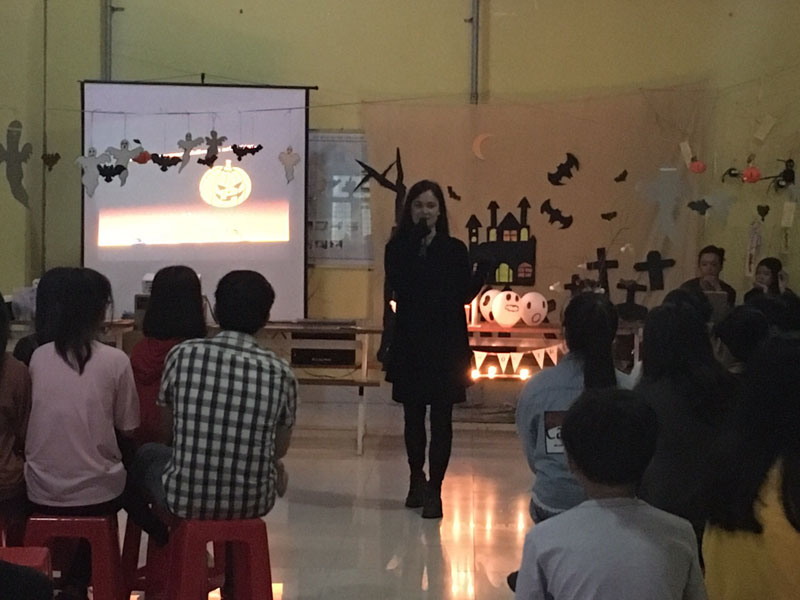 There’s always something to do at TVU. With students and staff from different countries, you have a chance to meet new people, make new friends, and take part in social and cultural activities. All student activities, such as performing arts, the English speaking club, and engaging in joint activities with international lecturers and students, give you an opportunity to develop team work, interpersonal and communication skills, and have a lot of fun in the process. 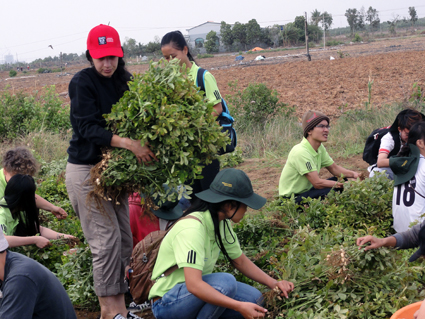 The English Club is a fun student activity club. It is a place for students and faculty to come together and participate in the Department of English.There will be weekly meetings for the club members to enjoy an “English speaking only area” and discuss everything from career prospects to sustainability projects.It is also the goal of the English Club to provide help to those in need of practicing English. 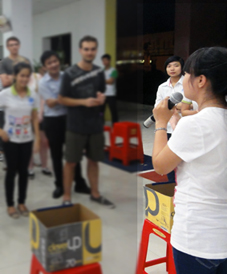 Communication is the key to success. That’s why effective communication skills are essential.

The Faculty of Foreign Languages is teaming up with Center for Communication and Community Engagement to start up a communication club in 2014. The club is a fun group of students interested in pursuing communication skills, including video communication, multimedia, interviewing, reporting and broadcasting.

You will learn from experienced and qualified faculty about how to produce news for audio, video, electronic and printing platforms. You will also learn basics like video and photograph editing, and digital skills. 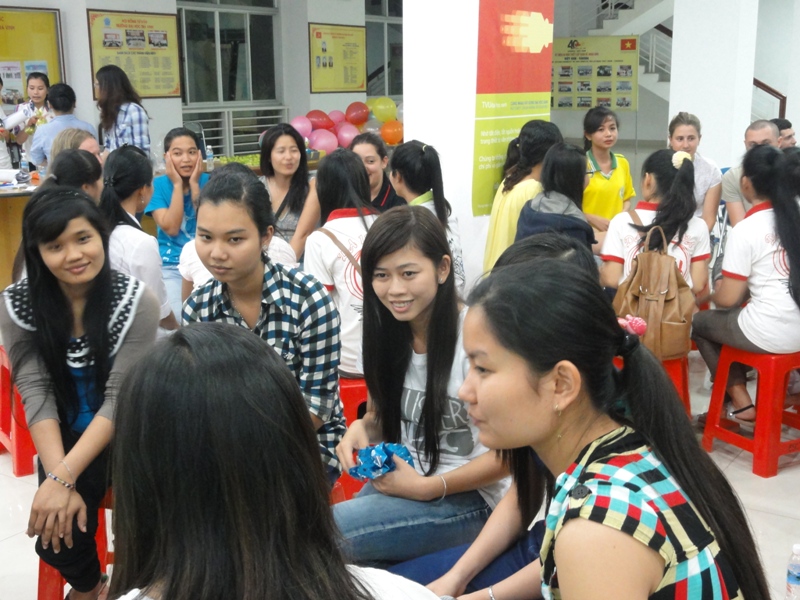 TRA VINH, 17.12.2013 – With the familiar sound of “Until You”, the airy duet between unlikely pairing of English lecturer Benjamin David Kahn and second-year English student Duong San was all the rage on Tra Vinh University’s campus 1 in the night of December 16.

After a modern dance performance of “My heart goes shalala lala, shalala in the morning” by year-3 English students, the duet rocked the live audienceof more than 300 students, parents and faculty members with their amazing voices singing “Feels like nobody ever loved me until you loved me.”

“’Get-Together’ is an annual student fun activity of the English Club on the campus of Tra Vinh University in the Christmas time.

It has become a time and place to get together with students and staff to explore all of the uses of the English language,” said Thach Thi Dan, Tra Vinh University’s Vice Rector in her opening speech of the Get-Together event.

This year's Get-Together theme - "Flames of Hope" - spotlights the importance of creative thinking and a joy of learning for TVU students. The theme was featured in the play “Cinderella” fantastically performed by students alongside visiting lecturers from the U.S.

“We are excited that our students have the opportunity to learn and work with prestigious English teachers from all over the world,” said Dr Nguyen Thi Phuong Nam, Deputy Dean and Head of Foreign Languages Department. “The work teachers and students from the Department of Foreign Languages have done is very impressive, for this I thank them all and wish them well for the forthcoming year.”

The English Club’s “Flames of Hope” was not complete without the beloved Christmas carol “Christmas Mash-up” mixed with dance beats by a group of Filipino students, who are currently studying at TVU. The enthusiasm and spirit of the performers touched the hearts of everyone present! Together they soon had the crowd clapping, hissing and calling out their exciting.

Members of the Club all gave this year’s Get-Together a truly unique blend of culture, music, and entertainment flavor. It was altogether an inspired and mesmerising show.

Last night’s stunning experience was the result of a month’s hard work by teams of students and faculty members in the Department of Foreign Languages. They all really made a fine impression in the light of a full moon over the campus. 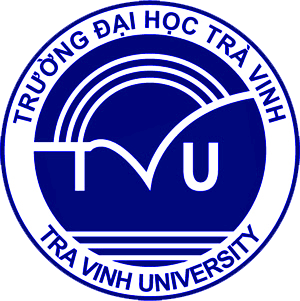 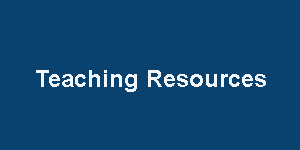